Every crafter needs a bottle of Mod Podge in their stash of supplies. It’s great for making new crafts, but really gains mileage in repurposed projects.

I’ve been so eager to say that.

And how cool that on this first day of spring, the Blogger Challenge is happening! Special thanks go to Susan from Momcrieff for organizing this season’s challenge and for brainstorming our project: Recycle something with Fabric and Mod Podge.

When Susan announced our project, I dug way back in my brain to the early ’90s (yikes!) for a fabric and Mod Podge project I had made not long after getting married.

I had some pretty cloth napkins and a basket leftover from our wedding that I decided would make a great pair. So I covered the basket with Mod Podge, spread some napkins over it, and finished off with a second layer of Mod Podge.

I filled it with fake green vines and leaves and used it as a decor piece for what was probably way too long Somewhere in the string of our 14 moves I parted ways with it.

When this season’s challenge came along, I decided to do something similar.

It just so happened that I had a couple of little wooden bowls I picked up at the thrift store last fall.

(Here’s a thrifting tip for you: If you love it, see potential in it, or it has an interesting shape, get it! You’ll thank yourself later.)

The largest would be perfect for what I had in mind.

Next, I needed some springy fabric. My bowl is just 8 inches in diameter, so I only used 1/4 yard.

The first order of business was to get rid of the fall leaves and wire handles. The leaves were nailed in with tiny little nails that popped right out.

I thought the handles were screwed on and all I’d have to do is unscrew them. Nay, nay…they were attached with those little rivet things.

I’m sure there’s an appropriate tool for this little piece of hardware, but since I’m a tool train wreck, I just got my flat-tipped screwdriver and hammer and pounded those little stinkers apart.

Have you ever tried to cover a round bowl with fabric (or to put it mathematically, to cover a solid with a plane)?

Let me just tell you that’s about as easy as bathing a cat.

I started with the obvious (to me) method of sitting the bowl in the center of the fabric, then folding up the sides. Something like wrapping a gift.

Just so you know…that doesn’t work.

Next, I decided to turn the whole thing over and approach it from the other side, working from largest to smallest. I’m sure there’s some mathematical reason this is the better approach.

But I’m not a math person.

Other than the four excessive corners of fabric,

I liked the idea of having some pleats on the sides, especially since there was some gentle ribbing on the bowl.

This time it was a go.

A few snips to get rid of those extra corners,

and we were ready to get going.

I gave the rim a coat of Mod Podge,

then turned it upside down on the fabric and pressed it together. A cool perk at this point was that the Mod Podge made a pretty immediate and firm hold. That was nice because the next step involved plenty of tugging and stretching.

Working in small sections, I added Mod Podge to the sides of the bowl, then pulled the fabric up and over. As I worked, I allowed the fabric to scrunch up in places, making little pleats.

Now for the top: I cut a (somewhat) circle in the center, leaving a good margin to fold down into the inside.

Then I gave it a snip every 1-2 inches, right up to the rim, and did the Mod Podge process again to fold them inside.

You didn’t forget how ugly the bottom was, right?

I grabbed a cereal bowl that was just a little bit smaller than the bottom of the wood bowl (how convenient was that?) and cut a round pattern – because I couldn’t cut a nice circle if my life depended on it.

Finally, I gave the entire thing a second coat of Mod Podge to seal it, and let it rest on top of a vase while it dried.

It just so happened that I had a ceramic bowl that was slightly smaller than my Mod Podged wooden bowl and fit nicely inside.

I added some water, a few pretty tulips, a little more of that bottomless bag of moss, and ta-da:

A Spring Fabric Floral Vase just in time for spring. 🙂

The Moral of the Story

I loved this project for a few reasons. First, I got to revisit a process I had used way back when – and update it. So many memories in the process…

Second, it was challenging. When you’re elbow-deep in a project and realize it’s not going to work the way you thought it would, it’s time to think outside your box.

Third, I love having a new piece for my sad (little) collection of spring decor.

Finally, I got to join some of my best blogging buddies, which is awesome! I can hardly wait to see what they created with their fabric and Mod Podge. Let’s go see: 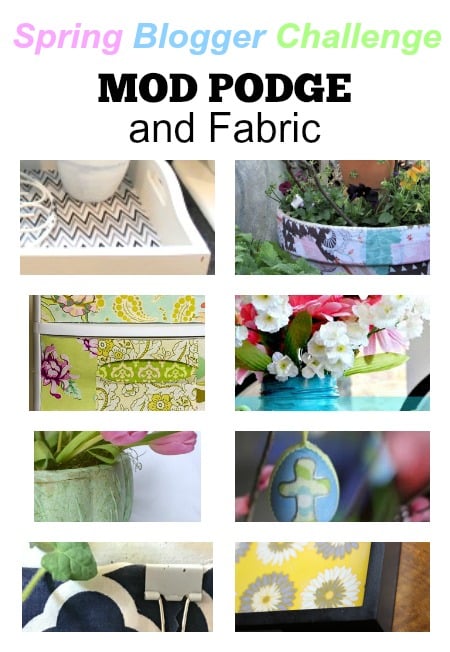 To Work with My Hands is a participant in the Amazon Services LLC Associates Program, an affiliate advertising program designed to provide a means for sites to earn advertising fees by advertising and linking to Amazon.com.